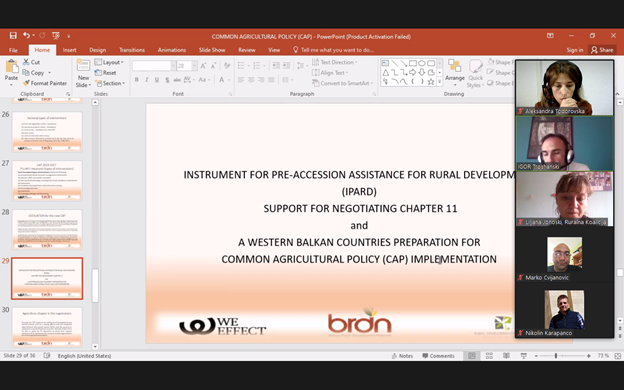 For BRDN member countries, rural development and agriculture (as a major part of rural development) are important priorities in the European Union accession process. This also applies to Croatia, which as a member country is a step ahead. So, being able to use the support measures designed with the Common Agricultural Policy (CAP) is a topic of high relevance and importance for the work of BRDN in the rural development processes in the Western Balkan countries.

To elevate BRDN members’ understanding and knowledge of the EU Common Agricultural Policy (CAP), an online training was recently organized, with the financial support of the Swedish development organization – We Effect Europe.

The training provided information and explanation on specific topics such as the history of the European Union; the processes of enlargement with special emphasis on the necessary preparations for the Western Balkan countries for their full membership; the basics and reasons behind the EU CAP, as well as the five major reforms of CAP; and the measures (types of interventions) supported under pillar I and pillar II as defined in the recently adopted CAP regulations.

In addition, the Instrument for Pre-Accession Assistance for Rural Development was described as a tool to support the enlargement process, improve competitiveness and living conditions in rural regions, align food safety and environmental standards with the EU, and overall prepare the Western Balkan countries for CAP implementation.

Did you find apk for android? You can find new Free Android Games and apps.
Share it on :